Artist’s Painting Uses Jesus (and an AK-47) to Target the Christian Right: Christ’s Teachings ‘Seem to Go Against the Republican Line’ 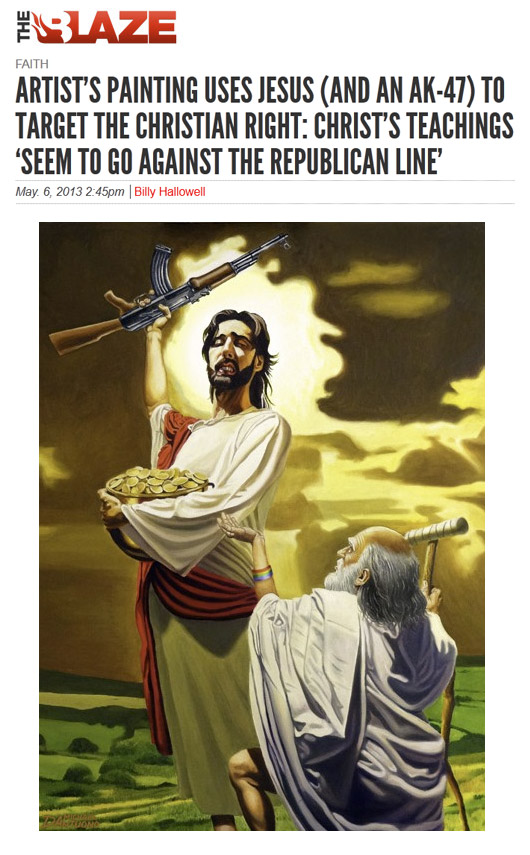 Artist Michael D’Antuono is certainly no stranger to controversy. His latest painting, “The Conservative Christ,” will likely frustrate conservative Christians, particularly because of how it depicts their views on issues like guns and poverty. TheBlaze spoke with D’Antuono today about his newest work to learn more about its meaning and what motivated him to create it.

In the painting, Jesus Christ is seen holding an AK-47 high in the air, as he simultaneously hugs a pot of gold, snuggling it close to his body. The Christian savior appears to be grimacing at a beggar who is on his knees, clearly in need of assistance (the man is raising his hand to Jesus and is wearing a rainbow wrist band).

This, in the artist’s view, is the conservative version of Christ: Uncaring, holding onto wealth and raising a firearm to the skies.

In essence, the purpose of the painting is, as described in a press release, to suggest “that the conservative positions the Religious Right supports are contrary to Christ’s teachings.”

In a phone interview, D’Antuono said that, despite being controversial, he’s not trying to offend. The artist also said that his painting is intended to “provoke thought.” As for why he decided to tackle the Religious Right’s policy stances, he was candid.

“In my understanding Jesus was all about compassion and forgiveness and helping the poor and curing the sick,” D’Antuono said. “The teachings of Christ — they seem to go against the Republican line when it comes to immigration or gay marriage and entitlements. All of that stuff.”

The artist said that he hopes the painting helps conservative Christians look within themselves to more objectively explore issues such as gay marriage, immigration and the economy.

“How would Jesus vote on these different issues? Would Jesus want to help the poor more? Why cut benefits for the people who need it?,” he asked.

While some will certainly be turned off by D’Antuono’s take on Jesus’ teachings and the Religious Right, but the artist is open to critique and differing ideals. He invites people to visit his website and comment about the painting.

“I don’t claim to have all the answers. My paintings often ask more questions than they answer,” he told TheBlaze. “I might learn from you.”

Do you find the painting offensive? Let us know in the comments section.

[This is a localized version of the article originally published at TheBlaze.com]
Tell Everybody!