‘Brought to You By the NRA’: Artist Unveils Provocative Sandy Hook Painting

The provocative painter Michael D’Antuono, like many artists, wants people to look at his work and think. But he doesn’t just want them to tilt their head sideways and ponder his use of light. He chooses controversial topics and scenes ultimately wants people to engage in discussion that could lead to change. And his latest painting is sure to cause some discussions — perhaps heated ones.The piece titled “Brought to You by the NRA” shows the wood floor of a classroom. Among scattered crayons lies a chalkboard eraser, a children’s career book, a carton of milk, a hand-drawn family portrait and playing blocks. Only those blocks spell out “NRA” and have gun sketches on their surfaces and bullet shells and blood splashes mar the scene. 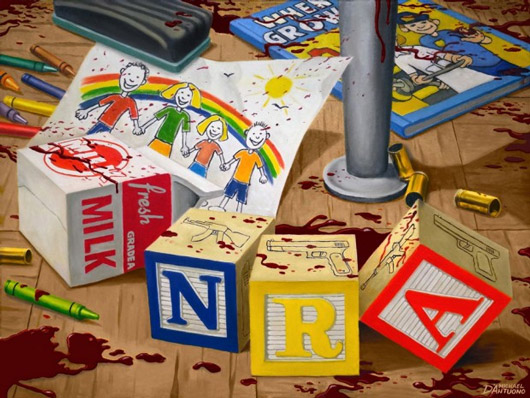 According to his website, the painting depicts the Newtown, Conn., murder and the NRA’s response. Twenty children and six staff members were killed by one gunman at Sandy Hook Elementary School on Dec. 14 2012.

“Instead of taking some responsibility and supporting tougher gun laws, [the NRA] call[ed] for putting more guns in schools,” the painting’s description said.

In an email interview with TheBlaze, D’Antuono said the painting was spurred on by his “overwhelming sympathy for the parents who lost their children, and the burning need to do whatever I can to help prevent more families to suffer the same pain.”

D’Antuono said he’s not sure how exactly people will react to this piece, but felt it needed to “reflect the gruesome reality of doing nothing.”

“It will certainly upset people, but they need to direct their anger at those responsible for creating conditions in which tragedies like Sandy Hook happen,” he said. “I’m not saying the NRA are the only ones who share some responsibility, but they are an organization whose sole purpose seems to be to lobby against any kind of gun control. You have to wonder how many of those children might be alive today if the NRA hadn’t have successfully lobbied Congress to let the ban on assault weapons expire. Let’s not forget that China had a similar incident the same day only the attacker had a knife and no children were murdered.”

This isn’t the first time we’ve brought D’Antuono’s work to TheBlaze. D’Antuono made his debut on TheBlaze and with the Glenn Beck audience in November last year with his painting “The Truth,” which depicted President Barack Obama wearing a crown of thorns with his arms stretched out in a similar position to that of Jesus Christ on a cross. You might remember the clash between D’Antuono and Beck on TheBlaze TV about the First Amendment.

D’Antuono as an artist doesn’t create pieces for decorative purposes. As the motto on his website shows, they’re meant to make a statement:

“Art is not made to decorate rooms. It is an offensive weapon in defense against the enemy.” -Picasso

D’Antuono told TheBlaze after hearing about the tragedy that he could think of little else and had finished the painting, which he hopes will show “how greed has corrupted our priorities to engender an environment where we can’t protect our children,” before Christmas.

Is the release of painting now still too soon though, given that it hasn’t even been a month since the 26 people were shot by 20-year-old Adam Lanza in Newtown? D’Antuono wrote that he waited a month out of respect but felt that “now is the time to remind people about the consequences of allowing the NRA to influence gun control policy.”

As for the symbolism in elements of the painting itself, aside from the obvious, D’Antuono said the etchings on the blocks are of semiautomatic and *automatic weapons. The drawing and “When I Grow Up” book are reminders of the lives that won’t be fulfilled in same way now. And the mix of crayons, bullet shells and splatter of blood D’Antuono said are to make the viewer uncomfortable.

“…uncomfortable enough to do what we must so that we never have to see that combination again,” he said.

*It should be noted, however, fully automatic weapons have been very strictly regulated since the 1980s, making it very difficult for civilians to acquire them. So-called “assault weapons” have come under additional scrutiny after recent shootings like the one at Sandy Hook, but legal “assault” rifles like the AR-15 and AK-47 are semi-automatic. Many pistols are also semi-automatic.

The Original Article is here