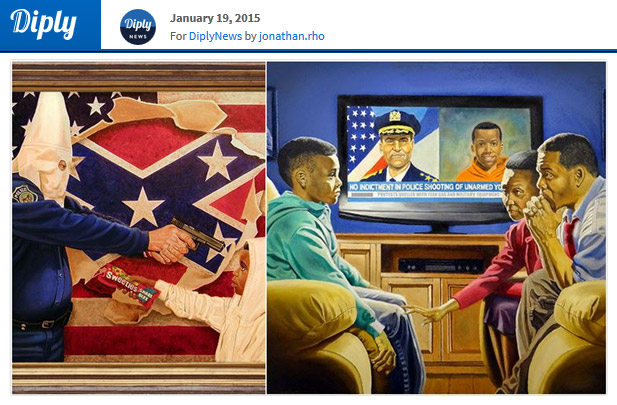 D’Antuono completed his painting “The Talk,” seen below, so it would be available for public viewing in time for Martin Luther King Day. The controversial painter has had to cancel art shows and once decided to remove one of his paintings, “The Truth,” from New York’s Union Square Park after some people found its religious images offensive. Many of D-Antuono’s paintings are also critical of the media and American government. END_OF_DOCUMENT_TOKEN_TO_BE_REPLACED

Comments Off on American Artist Tackles Race In America In Shocking New Painting | Filed under: Press |

(TRNS) – American contemporary artist Michael D’Antuono spoke with TRNS about his newest painting “The Talk,” as well as his other profoundly politically and socially driven works.

“The Talk” depicts a black mother and father looking at their young son pensively while a TV screen in the background shows the photo of a now deceased smiling black boy beside a white police officer with the words “No Indictment In Police Shooting Of Unarmed Black Youth” set along the bottom of the television screen.

“It’s been 50 years since Martin Luther King Jr.’s historic Selma to Montgomery marches. Contrast that progress to 2014, which saw police officers in several cities killing unarmed African Americans without risk of indictment. I doubt that Dr. King would have ever dreamed that in 2015, African American parents would still find it necessary to warn their young sons about the dangers of being black in America,” the painting’s caption reads.

Comments Off on Audio Interview on Talk Radio News Service | Filed under: Press | 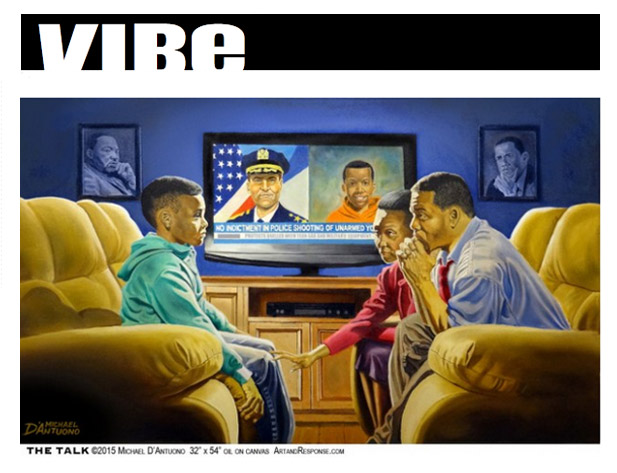 Black mothers and fathers across the country at some point have had to have “the talk” with their sons, to teach them how to act when encountering police, and most importantly, how to stay alive.

Artist Michael D’ Antuono created a powerful painting portraying what many African-American parents experience when trying to explain to their sons the gross injustice surrounding the killings of Trayvon Martin, Mike Brown, Tamir Rice or the many other young black men killed by the hands of law enforcement. END_OF_DOCUMENT_TOKEN_TO_BE_REPLACED

Comments Off on Vibe | Artist Michael D’Antuono Depicts ‘The Talk’ Black Parents Have With Their Son About Police | Filed under: Press |

As we celebrate Dr. Martin Luther King Day across the country, artist Michael D’Antuono released his latest painting called “The Talk”. Here’s what D’Antuono has to say about his piece:

END_OF_DOCUMENT_TOKEN_TO_BE_REPLACED

Comments Off on EclectaBlog | On MLK Day Michael D’Antuono’s art depicts how far we have yet to go on race relations in America | Filed under: Press | 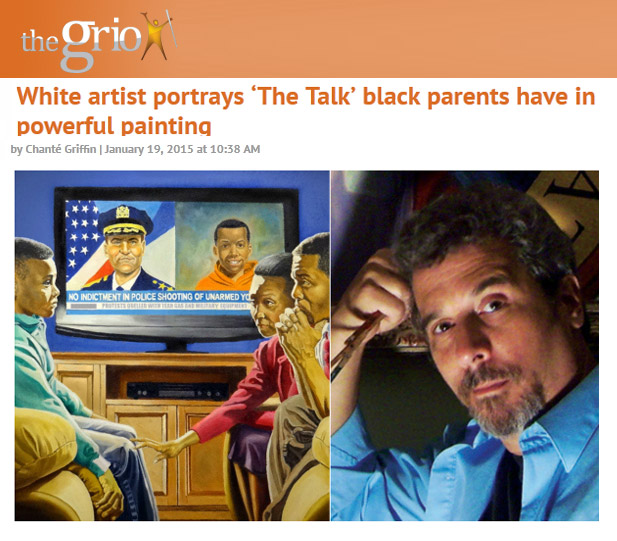 “How do you explain to a kid that the world isn’t fair? That it isn’t safe?” artist Michael D’Antuono asks, referring to his latest painting, The Talk.

In the painting, no one in the room is smiling. Not Dr. Martin Luther King, Jr. Not President Obama. Not the mother and father who lean in towards their young black son to have “the talk.” The only ones smiling aren’t in the room; they’re on TV — a once bubbly but now deceased black boy sporting a hoodie and an older white cop, sporting his officer’s uniform and a smug grin. The news title flashing on the TV screen explains the strained mood: “No Indictment in Police Shooting of Unarmed Youth.”  END_OF_DOCUMENT_TOKEN_TO_BE_REPLACED

Comments Off on The Grio | White artist portrays ‘The Talk’ black parents have in powerful painting | Filed under: Press | 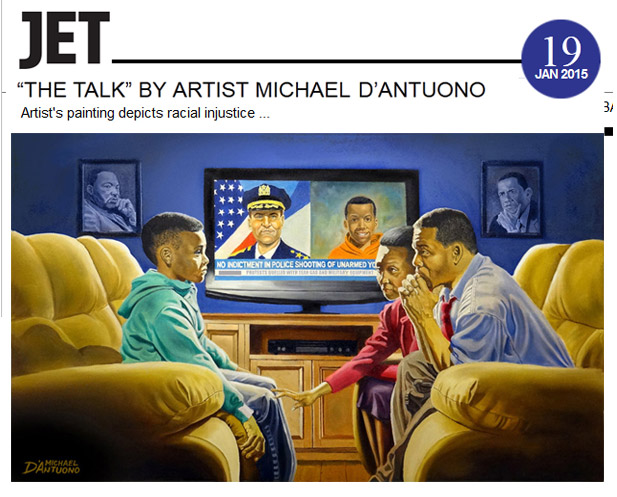 Art and response go hand-in-hand. Viewing an image or painting that evokes emotion and provokes thought that encourages conversation goes a long way in terms of deepening understanding of perception and society. END_OF_DOCUMENT_TOKEN_TO_BE_REPLACED

Comments Off on JET | “The Talk” | Filed under: Press |
« Older Entries

Warning: A non-numeric value encountered in /home/artandre/public_html/wp-content/themes/artandresponse/category-press.php on line 51