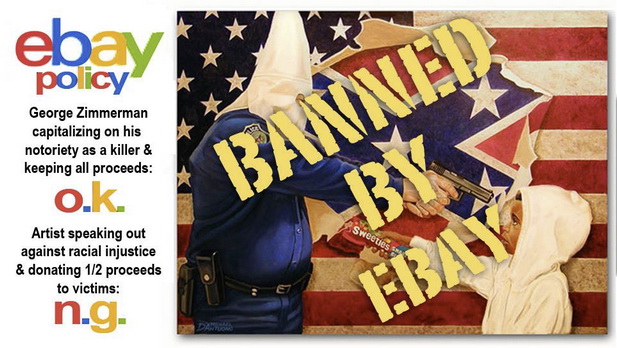 I’m sad to announce that ebay removed my “A Tale Of Two Hoodies” auction from their site. They allowed George Zimmerman to profit from his crime, yet I was denied the opportunity to speak out against racism & help victims. As the bidding started to gain momentum, passing the $25,000 mark, they took it off, deeming my auction “hateful and discriminatory.” If their stance seems wrong to you, feel free to share.

He also wrote this on his blog:

The painting in question was completed shortly after the Trayvon Martin murder. it was meant to symbolize the travesty of racially profiling innocent children and the affect prejudice has on policy. The bidding was gaining momentum quickly passing the $25,000 mark on day two of a scheduled seven day auction when bay decided to pull the plug. I feel ebay failed to see the forest from the trees on this one. In my opinion, any policy that allows a murderer to profit from his crime, but deems art that speaks out against racial injustice and benefits it’s victims ‘hateful and discriminatory’ needs to be reevaluated.

In light of recent developments, interested parties can send bids for the piece directly to me at Michael@ArtandResponse.com. Once the reserve is met, I will donate half of the proceeds to The Trayvon Martin Foundation.

In an email from eBay that D’Antuono shared with Raw Story, eBay claims that the painting violates its strictures that “[i]tems promoting or glorifying hatred, violence, or racial or religious intolerance aren’t allowed. Items that promote organizations with these views are also prohibited.”

According to the email, “[t]he painting you listed appears to contain images or icons associated with the KKK which are not allowed to be listed on our site as they represent an organization that glorifies hate and violence.”

D’Antuono told Raw Story that he was “outraged” that eBay would mistake a criticism of a hate-group for a statement that “promot[es] or glorif[ies]” one.