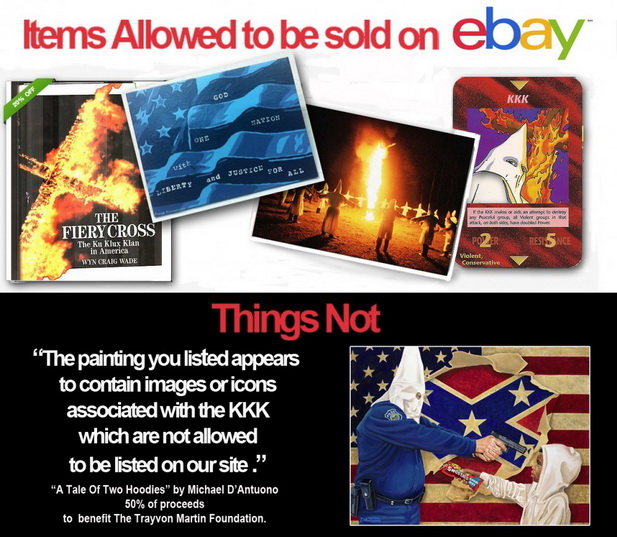 Two things happened on bay Saturday, Dec 21. The art auction of George Zimmerman, renowned killer of Trayvon Martin, came to it’s natural close, rewarding the rookie artist with $100,000. On the very same day, ebay decided to remove artist Michael D’Antuono’s painting that was inspired by the Zimmerman case and benefiting the organization founded in the name of Zimmerman”s victim.

Meant to to symbolize the travesty of racially profiling innocent children and the affect prejudice has on policy, D’Antuono’s painting depicts a KKK hooded policeman pointing a gun at a little black boy in a white hoodie as he offers the officer some of his candy. In shutting down D’Antuono’s auction, ebay cited their policy of foreboding  “Relics from the Ku Klux Klan or anything that bears the KKK symbol.”  Looking on ebay’s site I found 1,569 other items related to the KKK and mostly bearing their symbol.

Ebay’s policy violation alert read “Hateful or Discriminatory.” I hate to say it, but the only discrimination seems to be on ebay’s part. They discriminated against an artist speaking out against racism who was willing to donate half of the proceeds to The Trayvon Martin Foundation. A charity that is dedicated to advocating for crime victims, increase public awareness of all forms of racial ethnic and gender profiling educate youth on conflict resolution techniques and to reduce the incidences where confrontations between strangers turn deadly.

News of this double standard is starting to go viral.I have read several posts vowing never to use ebay again. I hope ebay is big enough to reconsider their decisions and discuss with the artist how the painting might be re-listed.