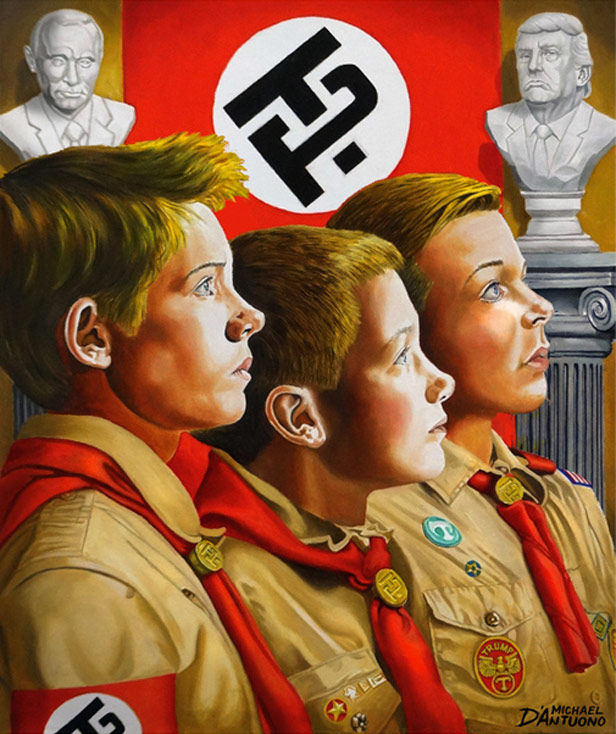 I understand that by now you’ve heard all the comparisons between Trump and Hitler. But better to repeat the comparisons than to repeat history. We all know how well the other authoritarian demagogue’s regime worked out. I’m not predicting Heir Trump will start occupying other countries or killing jewish people. Hopefully, the only empire Trump wants to build is his own business. He and his Republican allies will however cause the deaths of millions of (disproportionately non-white) citizens  through the repeal of Obamacare and the privatization of Medicaid and Medicare. I do think it’s fair to say Trump’s closest advisers, Steve Bannon and Jefferson Beauregard Sessions are to say the least, white supremacy friendly.

Sure, Ivana Trump revealed that Donald keeps a book of Hitler’s speeches by his bed. And I’m sure that it is no coincidence that the style and rhetoric of his speeches are eerily similar. But that’s just how he got here. It’s his authoritarian tendencies once in power that concern me most. He has disregarded all the conventional rules (and laws) regarding the required constraints of holding the office. To list a few; not releasing his tax returns, not divesting his businesses (or putting them in an actual blind trust), publicly violating the emoluments clause of the constitution, holding confirmation hearings of his cabinet appointees before completing FBI and financial vetting. He’s shutting out the media, you know, the fourth estate, the one responsible for assuring transparency and ongoing examination of the operations of government. And this is all before he is even sworn in. Not being fond of intelligence agencies with information that makes him look bad, he will reorganize the intelligence community to something more comparable to Hitler’s S.S. With a Republican congress (and soon the Supreme Court) watching his back, there are no checks and balances to his power. This is an environment any authoritarian leaning individual would thrive in. Hitler would have a field day. I hope I’m wrong, but the destructive power of the Totalitarian Trump & Putin duo can potentially make Hitler & Mussolini seem as dangerous as Abbott and Costello.

So no Donald, this is not Nazi Germany, but with your regime, you might very well trump them.

Heil to the chief.