You Can’t Handle ‘The Truth’

[This is a localized version of the article originally published at NationalReview.com] 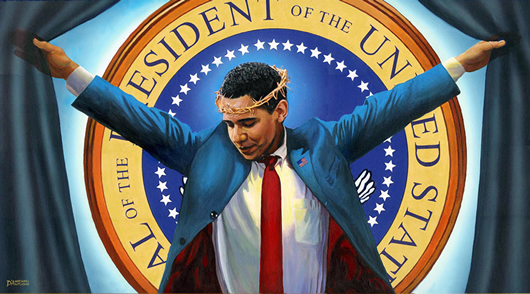 I just got off the phone with D’Antuono, and he had some surprising news: he’s decided that he’s not going to unveil the painting after all. (Though he didn’t rule out a possible gallery showing later.) While being provocative is often the goal for a lot of artists, I asked D’Antuono if the strong reaction and news coverage of the painting was what he was hoping for, he quickly said “No, not really.” Here’s how he explained his decision not to show the painting:

The idea of the piece, or the reaction that I’d hoped for, was to highlight our nation’s deep partisan divide and how our interpretation of the truth is really prejudiced by our political perspective and I think that to a large degree we are being manipulated by the media. I miss the old day when we just have the facts. Now we have pundits and spin and strategists.

I just thought that through that painting people would see different things. The right and the left would have different interpretations of it based on their political lens. But I have to admit I was very surprised that instead of that I got thousands of email complaining on the religious front. And that was not my intent at all. I wanted to create a dialog politically but not religiously. I didn’t mean to make fun of anybody’s religion; maybe I did so naively but I didn’t mean it that way. In the bible Jesus is The Truth and comparing Obama that way isn’t something I meant to do at all.

Apparently, I’ve upset a lot of people. And I’ve decided that’s not what I wanted to do and I’m not going to display it in the park on Wednesday … art is meant to be somewhat provocative but the religious element went way farther than I had anticipated.

When I pressed him about the religious iconography at play, he did seem to indicate that he’d been genuinely naive. “I know, I know — I did put him in a crown of thorns, right?,” knowing full well that his ignorance seems hard to explain. As for the rest of the explained his own artistic vision for the painting, it certainly seems like he was sincere in trying to make a non-partisan statement:

There were a lot of elements and they just all came together. The black veil that he’s opening – or is he closing? Is he creating transparency in the presidency or is he closing the veil and shutting out the Right, governing his own way?

In any event, D’Antuono seemed surprisingly thoughtful given how outrageous the painting might seem at first glance. While many artists simply see provocation simply as means of promotion and feeding their egotistical desires, it’s pretty refreshing to hear an artist admit that cares more about what he’s trying to say than simply playing with the ambiguity of perception — let alone admit that on some level he failed to properly convey his artistic vision. If only the rest of the art world was similarly free of pretension and posessed the capacity to be self-critical.