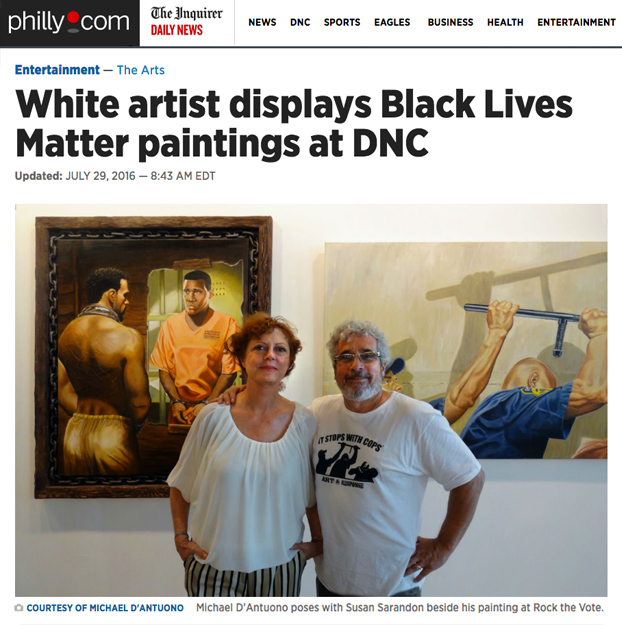 Michael D’Antuono poses with Susan Sarandon beside his painting at Rock the Vote.

So said artist Michael D’Antuono, who displayed his racially charged work at Rock the Vote’s exhibit hall on Spring Garden this week. He was in good company: Banksy had a piece there, and Shepard Fairey’s posters covered two walls in the DNC-related gallery. With his space, D’Antuono decided to address racism in the criminal justice system.

In one painting, The Talk, two African American parents sit on a couch, cautioning their child about racial profiling. Behind them, a message flashes on the screen: “No indictment in police shooting of unarmed youth.” A white face in a uniform looks on officially, contrasting with the sweet smile of a young black boy in an orange hoodie. According to D’Antuono, The Talk is meant to represent a conversation that almost all African American families must have about safety, and how the police force is inherently prejudiced against black kids.

Another shows a slave eyeing the mirror, with an incarcerated man staring back as his reflection.

“The prison system has replaced the plantations as the exploitation of the [black] man,” D’Antuono said. “And orange is indeed the new black, I’m sorry to say.”

D’Antuono speaks with prominent figures who offer arguments and counter-arguments about racial inequality in the United States. One of his subjects is former Philadelphia captain Ray Lewis, a vocal proponent for police reform who protested in Ferguson in 2014. D’Antuono said that Lewis provided the officer’s point of view on police brutality (he didn’t note that it might be a skewed one), giving an alternative perspective from victims of racially driven abuse. Based on Lewis’ history, it’s hard to imagine that he defended shootings of innocent lives, but D’Antuono still didn’t seem satisfied by his answers.

“He doesn’t condone the police violence obviously, but he explains why it’s so systemic, and the blue wall of silence,” D’Antuono said of Lewis’ responses. “They’re not good, but they’re real. They’re accurate.”

Apparently Lewis had explained that most officers just want to keep their jobs and stay safe. Instead of delving into the real mortal threat policemen face on the daily while in the field, D’Antuono refocused to announce that he wanted to create a system where cops felt they could be “whistleblowers” against their corrupt co-workers without consequences.

“They say that most cops are good, but I’m saying that good cops don’t allow bad cops to get away with murder,” he continued. “It’s very similar to the Catholic church, where they just move the pedophile priest to another church instead of [holding] him responsible for his crimes.”

He got into political art with The Truth, a portrait of Barack Obama. D’Antuono likes his portraits to capture more about their sitters than their likenesses, and he painted Obama as a Christ figure, his head encircled by a crown of thorns and his arms outstretched. The piece is a metaphor about how the conservative media crucify the president, whereas liberals tend to glorify him into martyrdom.

D’Antuono also has some problems with freedom of speech, namely, he feels his is being constricted. When the California Endowment wanted to feature The Talk on a billboard, Clear Channel forbade it. He tried to exhibit some of his work in a New York park; when conservatives planned to bus in protesters, he cancelled the event. At two high schools, students replicated his art for public viewing, only to be pressured not to show it (surprisingly not for copyright infringement).

“It’s the police that were fighting these kids, literally bullying these high school kids (about) taking down their art,” D’Antuono said.

The Bill of Rights is a document that protects citizens from the government, not from private interests – but D’Antuono doesn’t see a distinction between big business and the public sector.

“The problem is corporations now have taken over the sovereignty of the government,” he explained. “It’s the tail wagging the dog. So Clear Channel is a private company, but they’re not allowing my free speech.”

For his social commentary, “I’ve been called the Norman Rockwell of the revolution,” D’Antuono said, though which revolution he could not name.

“My paintings have an edge,” he said. “These are more divisive times. There’s a lot more going on now.”

Despite everything that’s “going on now,” D’Antuono’s not trying to light a fire just for fun.

“I’m not controversial for the sake of being controversial,” he said. “I do the painting, and then the media uses and interprets the piece to fit their agenda.”