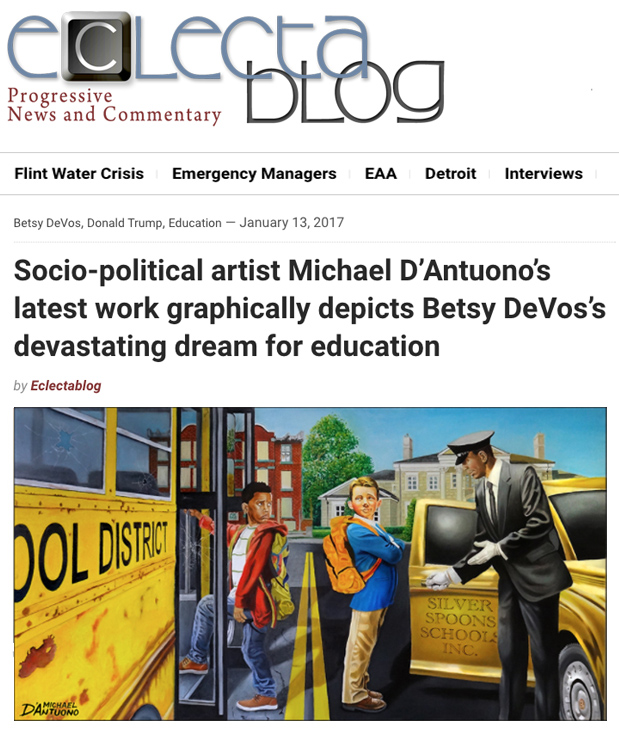 Michael D’Antuono is an artist who challenges our social and political beliefs with his hard-hitting and often controversial paintings. His work has been featured here at Eclectablog before (HERE and HERE.)

Just in time for the confirmation hearings of Betsy DeVos, Donald Trump’s pick for Secretary of Education, D’Antuono has a new painting out titled “Class System” that graphically depicts DeVos’s tragic and devastating dream for public education in America:

Here is what D’Antuono writes about this provocative new painting:

President-Elect’s pick for Education Secretary, Betsy DeVos, will have to overcome more than just stiff resistance from Democratic senators, she will be the first appointee to ever be confronted with a painting depicting the dangers of her appointment.

I am releasing my condemnatory visual indictment of a DeVos appointment, titled, “Class System” just in time for DeVos’s confirmation hearing. The painting depicts a stark contrast between two children being transported to school. One, a black child, is boarding a rusted out public school bus with broken windows, the other, a wealthy while child, is being escorted into a private school’s limousine by his chauffeur.

Asked his inspiration for the painting, D’Antuono replied, “Betsy DeVos’s agenda of increased privatization of primary education will exacerbate the inequality of education and expand the opportunity gap for generations.”

Despite all her rhetoric about “school choice” and making schools better through “market solutions” and “competition”, it’s clear that Betsy DeVos’s vision for education in America is all about creating a two-tier system, one where the children of wealthy parents have access to the best education available and another where the rest of the kids are left with the crumbs that remain. And in the process, for-profit charters and religious schools enrich themselves with our tax dollars. D’antuono captures this perfectly in his beautiful artwork.