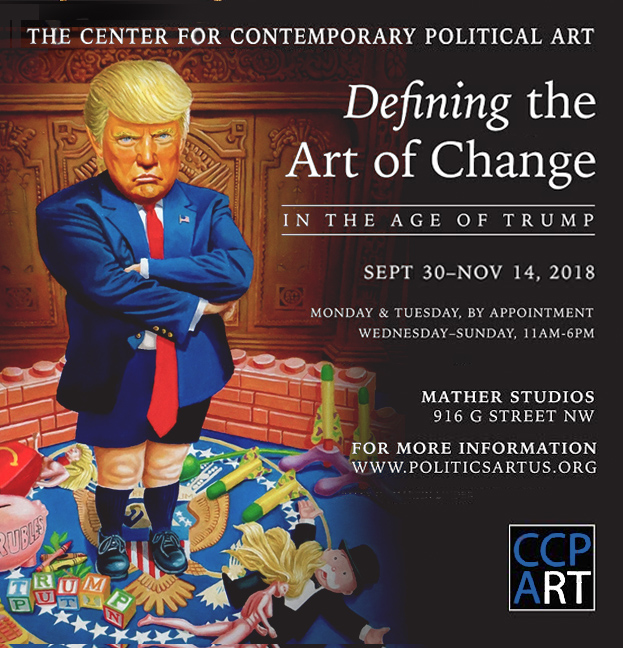 A Trump Exhibit like no other. Donald Trump has changed the tone of national discourse in America. The Center For Contemporary Political Art’s premier exhibition will reflect that change with art no one else has been brave enough to exhibit until now.

The Nation’s first fine arts center dedicated exclusively to political art opens Sunday, September 30 with a massive exhibition of over 100 works by 99 political artists. The Defining the Art of Change in the Age of Trump exhibit will unleash the kind of hard-hitting art you won’t see anywhere else.

The works of art in the exhibit were selected by a jury of art experts from more than 500 works submitted by nearly 300 artists from across the country. The jurors were Dorothy Dietrich, an art historian a former professor of art history at Princeton University and Pratt institute; Judy Greenberg, director emeritus, Kreeger Museum: Jack Rasmussen, director, Katzen Arts Center, American University and Charles Krause, founder and board chair.

The center is kicking off with art too controversial for galleries and museums afraid to offend donors or get into a pissing match with a president. Artists include Michael D’Antuono, Gary Aagaard, Alfonse Pagano, Kevin Flynn, George Kennedy and many more. Featured art above; The Petulant President by Michael D’Antuono.

The Center opens to the public at noon on Sunday, September 30th, 2018 across from the Martin Luther King Library 916 G Street NW. Washington, DC. The center’s website is www.politicsartus.org. For more information contact Charles Krause 202-638-3612 or charles@politicsartus.org.