The Blaze – Glenn Beck clashes with creator of crucified Obama painting over first amendment hypocrisy: ‘This is so dishonest’ 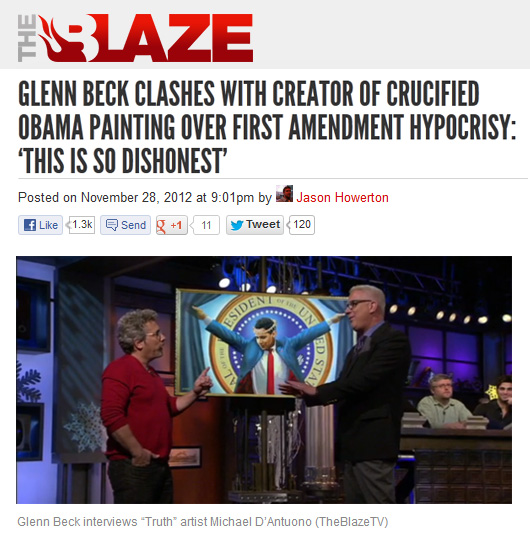 During his show on TheBlazeTV Wednesday, Glenn Beck resumed his discussion on the First Amendment, particularly how it relates to artistic expression. After much controversy surrounding Beck’s creation of an Obama bobble head doll submerged in a mason jar of yellow liquid (which was actually water with food coloring), he sat down with the artist, Michael D’Antuono, who inspired it all with his controversial painting titled “Truth.”

The painting, which features a crucified President Barack Obama wearing a crown of thorns, led Beck to test the limits of freedom of speech.

D’Antuono argued that he did not intend to portray Obama as Christ despite the veil/curtains, crown of thorns and the implied crucifixion. Beck accused him of not being totally honest about his intentions.

“I do not think he is Christ. I was not trying to convey that,” D’Antuono told Beck, explaining the inspiration behind his painting. “Actually, this painting does not convey my own personal opinions. It is more a mirror reflecting the personal opinions and prejudices, preconceived ideas of the viewer. It’s kind of a sociological experiment.”

“I don’t buy that bullcr– come on,” Beck replied. “How do you not say this is an image of Christ? He is splitting the veil, you know that right?”

In response, the artist said there are so many “interpretations” and the curtains could stand for “creating transparency.”

What about the crucifixion pose? D’Antuono said Jesus was not the only person crucified, further defending his claim that he was not depicting Obama as Jesus.

“It could be. But I’m not comparing him to Jesus,” the artist replied.

“This is so dishonest,” Beck interjected.

Watch part one of the interview below via TheBlazeTV:

D’Antuono admitted he saw the “religious reference” but said he was trying to convey that Obama was “metaphorically crucified by the Right.”

Then Beck applied the hypocrisy test: “Would you think that you would ever paint something of me, that I am crucified by the Left?”

“Well, uh, I haven’t given that any consideration,” D’Antuono replied.

Beck also discussed a few of D’Antuono’s other paintings, including one that features a cop in a KKK hood holding a gun to a black child’s head who is holding a bag of skittles. The painting was supposedly “inspired” by the Trayvon Martin case but did not represent it. Beck said he found it “extraordinarily offensive.” 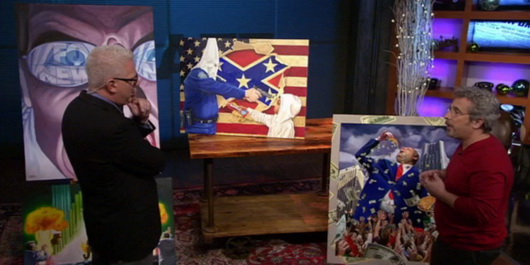 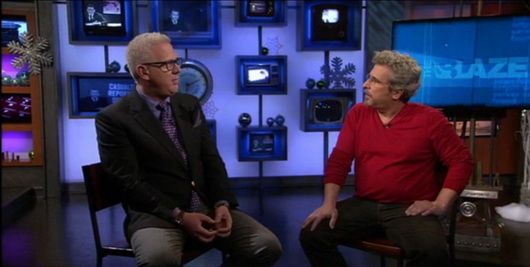 After some tough, but respectful, debating, D’Antuono later admitted that he did not expect Beck to be such a “reasonable person.”

“Yeah, I don’t know how I’m going to go home and tell my family,” the artist joked. “I expected you to try to tear me apart… I think that’s the reputation you have from the Left, but it’s not true.”

Though they agreed on very little, Beck said they were able to have a reasonable conversation about controversial things.

“There’s not enough people on either side that are seen in the media that can have an honest conversation,” Beck added.

The most surprising part of the interview though came at the very end of the segment.

After Beck mentioned the fact that D’Antuono does not watch his show, the artist replied: “Well, I may start.”

This post has been updated. It also now reflects that the content of Beck’s mason jar was in fact water with food coloring, not beer.

[This is a localized version of the article originally published at TheBlaze.com]
Tell Everybody!