This Painting Is What One Artist Thinks of Senate Shooting Down Gun Control Bill: ‘Blood Money’ 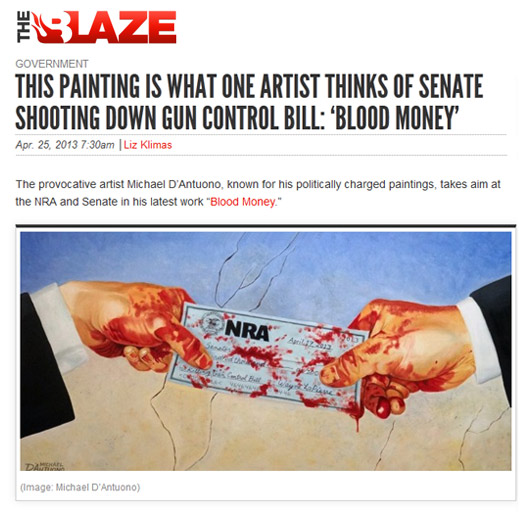 [This is a localized version of the article originally published at TheBlaze.com]

The oil painting depicts two bloody hands reaching out in a position reminiscent of Michaelagelo’s Creation of Adam with a check in between. The check is made out to “Senator” and signed by the NRA’s Chief Executive Wayne LaPierre. The amount of money is covered, but it is dated April 17 with the section stating the purpose of the funds as for “killing the gun control bill.”

“I hope to motivate people not to be complacent and demand that they be represented,” D’Antuono told TheBlaze in a phone interview Wednesday, referencing a February poll that indicated 90 percent of Americans would support universal background checks.

The painting’s description on D’Antuono’s website Art and Response states:

In the wake of Newtown, 45 senators disregarded the will of 90% of Americans who support universal background checks for gun buyers. They willingly put more innocent lives at risk just to ensure that their campaign contributions from the NRA keep coming. This is the most blatant and egregious example of special interests subverting our democracy with great sums of money.

D’Antuono said he started the painting well before the Senate voted against gun control legislation last week, which included universal background checks and a ban on so-called “high-capacity” magazines.

“I was hoping to influence the vote with it,” D’Antuono said, explaining though that he didn’t rush finishing it. “I had faith the bill would go through.”

Michelangelo’s Creation of Adam, which depicts God reaching out a finger to Adam’s own outstretched hand, D’Antuono said is one of the most iconic symbols of humanity.

His allusion to it in his painting shows “is this where humanity has gone?”

D’Antuono’s painting will be on display Silent No More — March on The Lobbyists event in Washington on Thursday, April 25. This event, according to Washington Peace Center, is being organized by a coalition of progressive organizations, gun violence advocates and others naming lobbyists for the gun industry.

“We will name them, shame them, and then march on to their K Street offices,” the event said.